Posted on February 5, 2017 by guitarsophist

During winter break, I was suddenly struck with the idea of learning to play the five-string banjo.  I had never had a banjo, except for one I borrowed briefly about 20 years ago.  I wasn’t particularly interested in bluegrass.  I had just always like the sound of banjos.  There was something sweet, yet melancholic about the way the notes sounded and decayed.  I don’t know.  It was just out of the blue.  It was an impulse that may have had something to do with the 2016 election.

I know some people will say, “How lame!  How uncool!”   Well, I think there is the potential for something very cool.  I was in kind of a musical rut with guitar.  I wanted something very different.

I did a little bit of research, found that a lot of people recommended the Deering Goodtime open back banjo as a solid beginner’s instrument.  Then I did a little more research and decided that the Goodtime Americana, with a 12″ pot and a renaissance head, was just the thing.  The larger pot (11″ is sort of standard) and the special head was supposed to deliver a bassier, mellower sound that was appropriate for Old Time music and for accompanying singing. I found a bundle deal on Amazon that included a nice stand and a Gator case for $10 less than the banjo usually costs alone.  I ordered it. 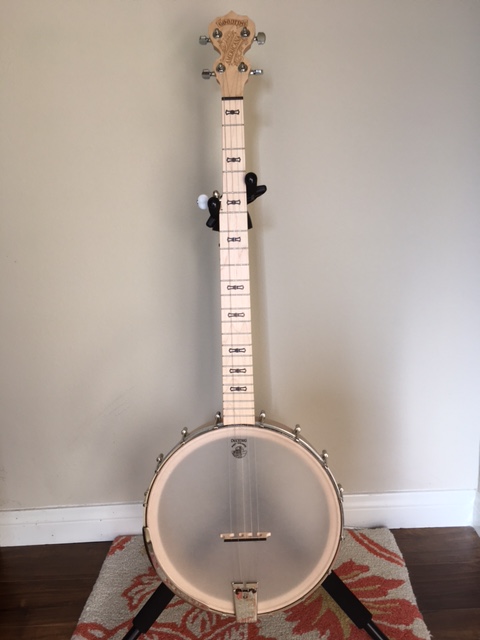 Once I had placed my order I began further research.  It turned out that the five-string banjo had its roots in an instrument brought from Africa by slaves.  Once on this continent, it evolved quickly through American ingenuity and technology.  I like the African origin and American evolution.  (Note: There are those who deny the African origins of what they see as a very American instrument, but there appears to be ample evidence that an African lute called the “Akonting,” a three-string banjo-like instrument  with a gourd resonator and a high drone string, is a direct precursor of the American banjo.)

I also ordered CDs of clawhammer banjo by players old and new.  I have quite a collection already.  I learned a lot.

Clawhammer has a distinctive rhythm created by hitting a melody note with a downstroke from either the index or middle finger, then brushing the strings, catching the fifth string, which serves as a high drone note, on the way down, and then releasing it on the way up again.  It is almost counter-intuitive for a guitar player.  There are also two-finger and three-finger up-picking styles.  The “Scruggs” style favored by bluegrass players is a version of the three-finger picking.  I can fingerpick a guitar, so I think those styles will come relatively easily later.  Right now I am focusing on clawhammer, which is sort of rewiring my musical brain.

Bluegrass players tend to stay in G tuning.  Old Time clawhammer players use a lot of different tunings, among them G, C, Double C, D, and “Sawmill,” which some people call “G modal.”  People tend to retune to make the melody “lay” on the fretboard in a convenient, harmonious way. It’s fascinating.  Old Time banjo players often accompany fiddlers, so the banjo tradition and the fiddle tradition are entwined.  A lot of the Old Time banjo repertoire started out as fiddle tunes.  There is some very old music here that goes back to the British Isles.  Some melodies may even go back to Africa.

I quickly found myself in full banjo obsession mode.  I have already acquired another instrument, a banjo I made from a kit I obtained from Backyard Music.  This one I will use as a practice and travel banjo.  It is extremely light, so I may take it hiking.  It has a resonator made from a resin-infused cardboard tube and a thin plywood disk, so it is not very loud.  The neck is mahogany.  The neck runs through the pot, serving as both fretboard and tailpiece.  It is a very clever and efficient design.

I will post a picture of the completed Backyard Fireside Banjo when the glue dries.  I will post sound files a bit later.  Right now I don’t play well enough to share!  I am making progress, however, and having fun.

Update: Here is the finished banjo:

It plays and sounds nice. It is quiet, however. Definitely for practice and hiking trips, not for jamming with other players.

I'm a guitar-playing rhetorician professor.
View all posts by guitarsophist →
This entry was posted in Music and Guitar and tagged banjo, clawhammer. Bookmark the permalink.