Three Snares and Some New Hi-hats

Posted on November 26, 2011 by guitarsophist

I have had the Tama Silverstar Metro Jam kit for almost a month now.  My touch is getting better, and I can pretty much do on the Tamas everything I could do on the TD-4.  I like them!

Before I ordered the Tamas I had started talking to a guy on the Drum Forum (DFO) about some old snares that he had.  Then when I set up the Tama kit, I didn’t like the 12X5 snare that came with it.  To tell the truth, I didn’t really I know what a real snare should sound like, but I thought it was too bright, with not much sustain, and that the sound didn’t really fit with the rest of the drums.  It turned out that my first impressions were mostly wrong, but I went ahead and bought a couple of old snares, a 1971 Ludwig Standard that had had the paint stripped off and some hammering done to the shell, and an old 14X5.5 maple Kent.  Here are the three snares that I now own: 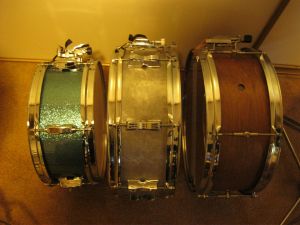 During shipping a screw came loose inside the shell on the Ludwig, so I had to take the batter head off, fix the screw, and tune it up again. I am starting to get comfortable taking drums apart and tuning them. It is not rocket science. The Ludwig is very dry and very sensitive. It seems to me that it would be good for jazz and brushwork, and it is fun to play rolls on it because it is so responsive. The Kent, on the other hand, has a fatter, mellower sound. To me it sounds more like rock ‘n roll. The batter head on it is a Ludwig Weather Master tom head that looks like it has been used on hundreds of gigs. 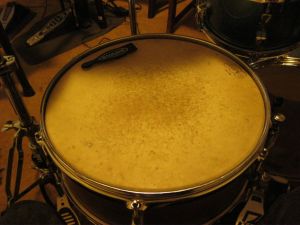 The Kent came with an old Ludwig tom tom head on it.

The drum would probably be more focused if I changed the heads, but for now it sounds good and I like the vibe of the old head.

These two drums are very different.  I have already learned a lot about snare drums from owning and playing them.  The Drum Forum (DFO) is a good place to learn about drums and meet other drummers.  The members there are mostly pros who have been playing for a living most of their lives.  The age factor there probably skews above 40, and there are a lot of vintage enthusiasts.

Yesterday I put the little Tama snare back on the stand, and it sounded pretty terrible.  However, from working with the other drums I knew that it was not tuned up right, and that the stock heads, which are still not broken in, had stretched.  I tuned it up pretty high and it started sounding pretty good.  It tends to ring a bit, so I put an Aquarian Studio Ring on it, which is just a ring of plastic that damps down the overtones.  Now I like that snare too.  It is smaller, not quite so loud, and the sound is in between the Ludwig and the Kent.

I also bought some used hi-hats.  To my ear the 14″ Wuhan hi-hats sounded good open and part open, but the closed stick sound was dull and lifeless.  That might just be me, or my playing, but I found some similar opinions on the web.  When I play with Craig Saxon we play a wide range of stuff from classic rock to Frank Sinatra, at low volume, so I wanted hats that were versatile and not too loud or cutting.   I decided I wanted a pair of 13″ Zildjian New Beats.  I started looking on the Guitar Center used gear site, and I found a pair that were in the Brooklyn store for $159.  New, they cost $274.  They looked brand new in the photo, so I bought them online, and had them shipped to the Pasadena, CA store.  That whole system worked well, and the GC employees were very helpful.   Here are the hats: 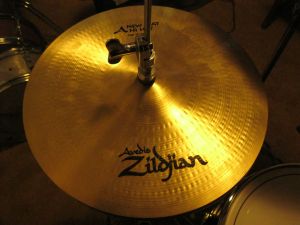 According to the serial numbers these were made in 2010, and except for some fingerprints, they do indeed look brand new. They still had barcode stickers on them. They would not be cool on the DFO site, or on Cymbalholic, where old vintage cymbals and new esoteric ones are popular, and it is hip to scorn new product from Zildjian. However, to me they are crisp and expressive, and exactly what I was looking for. I may buy some more used cymbals this way.

2 Responses to Three Snares and Some New Hi-hats