I have been looking a mini-amps for a while.  The two main contenders were the Roland Micro-Cube and the Vox DA-5, but by the time I got around to ordering one, the DA-5 had been replaced with this one, the Mini3.  It comes in black, ivory, and green.  Mine is ivory.

I didn’t have high expectations, but this thing sounds great!  It is easy to dial in cool sounds in seconds. It has ten amp models that increase in gain as you go around the dial: Boutique Clean, Blackface Twin, Tweed Bassman, Vox AC 15,  AC-30 Top Boost, three Marshalls from ’70’s, ’80’s, and ’90’s, a “CaliMetal” and a “US Higain.”  It has compression, chorus, flanger, and tremelo on one knob, and two delays and two reverbs on another, allowing you to combine two effects, one on each knob.  As you rotate the knob, it goes from the minimum to the highest level of one effect, and then switches to the next.  This works well. 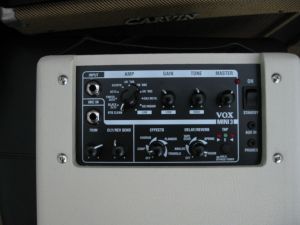 It also has a mic input, which unfortunately is high impedance so you can’t use an SM-58 or anything that needs phantom power.  I tried it out with an old Audio Technica AT 812, and it worked fine.  You can send the mic signal through the delay/reverb effect.  This would definitely work for street corner busking.

The amp is surprisingly loud for 3 watts and a 5-inch speaker.  The cabinet is very sturdy.  Very nice for the $99 street price.

Some discussion board posts about this amp complain about noise.  The circuit seems to have a limiter that clamps down on noise when you aren’t playing.  I don’t detect much noise coming from the amp itself, but somehow typical single coil buzz seems more prominent than usual, perhaps because  the amp is normally played at low volume.  I tend to favor my humbucking-equipped guitars with this amp, but as always, once you get into playing, single coil buzz tends to recede into the background.

The main thing, of course, is that it sounds good.  It is very musical, and just a lot of fun.  I like to use it with my Boss DD-7 delay functioning as a looper.  I set up an interesting soundscape, lay down a groove (up to 40 seconds), and start riffing over it.  To do a loop with the DD-7, set it to “hold” mode, hit the pedal on the “one” count, play your chords, and hit the pedal again on the “one” count.  With a little practice you can record a smooth loop that will track until you stop it.  You can even lay down other parts by repeating the process above with the loop running.  Sometimes I use a mild distortion pedal, like a Danelectro Transparent Overdrive, ahead of the delay so that the lead has more contrast from the rhythm track.  This setup makes a great practicing or songwriting tool.  Of course, I could do something similar going into my computer, but this setup is easy to just turn on and start playing.

The Vox Mini3 is so much fun that it makes you want to keep playing for a long time.